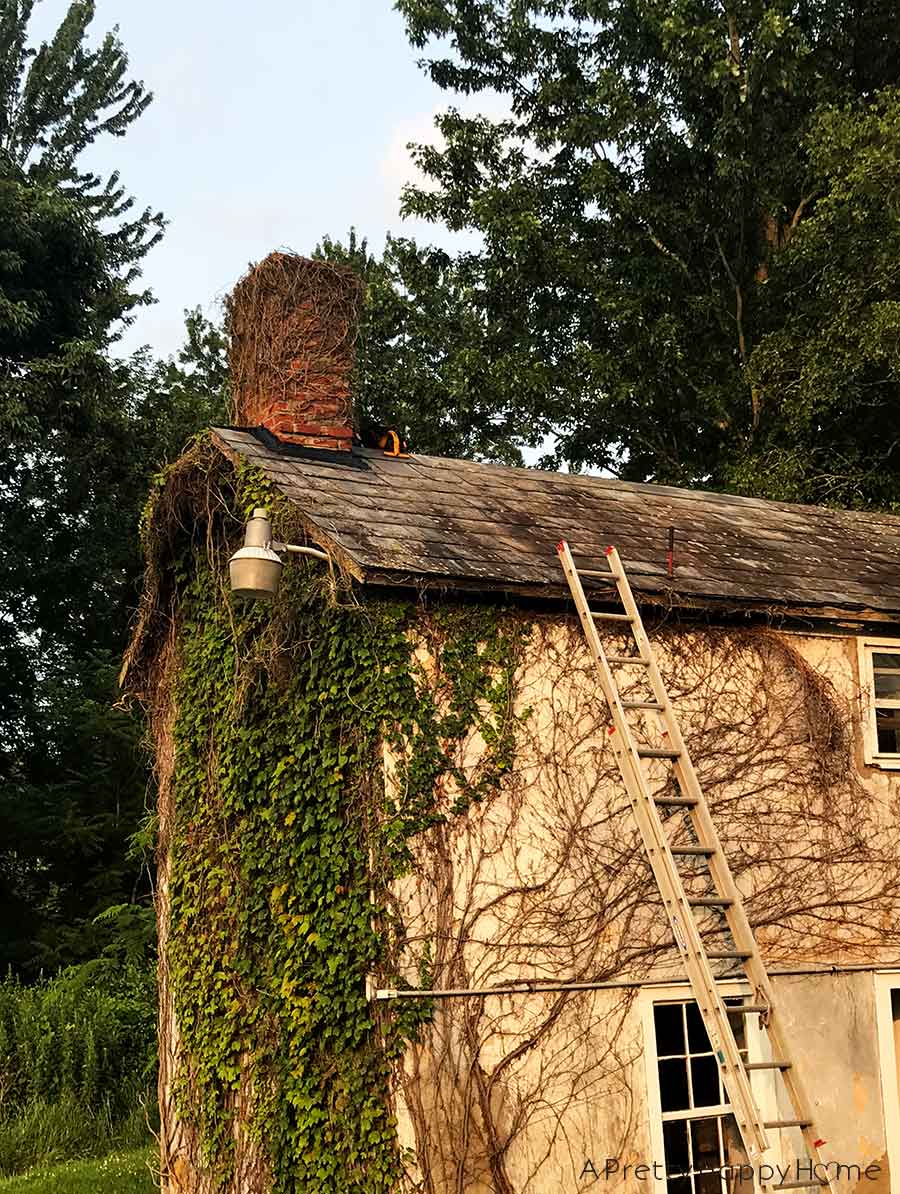 Here’s something I learned last week.

Roofing Person: You have an active leak, ma’am?

Me: Isn’t that the very definition of a leak?

Roofing Person: Okay. We can come out and take a look in 3.5 million years from now and then get you an estimate to do the repairs 1.5 million years after that. Of course, that’s contractor time, so plus or minus another million years on all those dates and times.

Me: My house could crumble to the ground by then.

Roofing Person: So should I put you on the schedule?

I realize when I type this next sentence it probably sounds fancy, but it really isn’t. Our new property has a Carriage House with a small and very old studio apartment. Blue bathtub kind of old. It is like a hotel room in terms of size and functionality.

We are in the process of giving that space a mini-makeover so that our guests can use it when they come for a visit. And by mini-makeover I mean we are reconnecting water to the building and leaving the blue bathtub. Only the best for our guests!

The roof of the Carriage House is slate. While we were in there working one day after a strong thunderstorm we noticed the roof was leaking.

This might shock you, but I’m not a roofing expert. I’m even less of a slate roofing expert, so I had to gain some knowledge. Fast.

Even with my limited knowledge I could look at the slate roof and see a missing tile near the chimney. Since that missing tile was directly over the spot in the ceiling that I could feel was wet after the recent storm, I knew we had a problem.

One might even say we had an active leak. Under normal circumstances, we might have tried to figure out how to fix the slate roof ourselves. However, our plates feel very full right now and this was one problem that we didn’t have the mental energy to try and figure out before the next summer storm blew in.

As it turns out, finding a slate roofer (there aren’t many of them in our area) also took a massive amount of mental energy. The seller of our home left me a list of companies that have done work on the house. Unfortunately, a slate roofer was not on that list. Perhaps he’d never needed the services of one.

This is probably because a slate roof, if well maintained, can last 100 years or more.

I’m not even joking. That’s how durable slate roofs can be.

Ours is probably reaching that maximum age.

Slate roofs, at least in Central New Jersey, are also notoriously expensive to repair. I’m not sure why, but maybe because not many contractors work on slate roofs anymore.

My first quote to replace the handful of missing tiles was $1,100. And I should mention that we have all the replacement slate tiles, so this quote was solely for labor. He could come out within two weeks to do the repairs.

Another company wouldn’t even be able to come out and look at the roof in order to give us a repair estimate for another 10 days.

The next quote ended up being from one of my neighbors who has done work on the roof of our main house. He said he could replace the missing tiles and seal the ridge line and the chimney for $500. He could also come the next day to do the work before the next storm arrived. I had assumed (due to the cost and some of the cautionary tales we had read online) that repairing a slate roof was a really technical skill. It probably is really hard, but our roofer just made it look easy.

And as many home repair projects go, a novice can really screw things up. We didn’t want to be the slate roof novices that made a bad problem even worse.

Repairing the slate roof took the roofer one hour. ONE HOUR. I spent longer than that on hold with all the roofing companies I called.

I was fascinated by the process of repairing a slate roof though. The slate is scored and cut to size with a slate cutter, which resembles a basic paper cutter.

Slate tiles are nailed directly to the roof. The slate cutter tool can also punch out a hole for the nail. According to our roofer, slate tiles can be installed onto individual planks or a type of lath board. The idea is to use wood that will last as long as your slate. Our roof actually has wood sheathing underneath it like a modern roof would have. This might not be the most durable choice for a slate roof, but will potentially save us money if we decide to replace the roof with architectural shingles some day.

Our roof didn’t seem to have metal flashing (or it was in disrepair) on areas that you might expect it like the ridge line. So our roofer then sealed around the chimney and the ridge line with a type of roofing tar. The tar is troweled on and layered with a mesh type of fabric to give it added strength. If you’ve ever seen a cast for a broken limb made, it’s the same concept.

The roofing tar has to be installed on dry tiles, but as soon as it is applied it seals the roof.

Sealing the roof in this way got the immediate job done, but it was probably not the proper or preferred way to do things. The proper way to do things would be to spend a lot of money to have the metal flashing replaced.

Our goal with this whole project was just to patch things up to give us some time to make a better informed, long-term decision about this roof since it appears to be approaching the end of its lifespan. How do we know this? Besides the issue with the flashing and the fascia, a lot of the slates have started to crumble, so we weren’t worried about tar further ruining the slate tiles.

Definitely ask a lot of questions and do your research so you understand the ramifications of the techniques being used to repair your roof.

Our decision over the winter will be to determine if we keep the roof slate or switch to architectural shingles? Who knows. We need to see what other surprises this old house has in store for us before we make a decision. When the tiles were replaced, Handy Husband and the roofer peaked their heads into the attic crawl space and could no longer see any daylight, so we were good to go!

In case you are wondering, I am willing to spend hours trying to find a roofing contractor, but I am not willing to stick my head up into a dark, scary attic space. No way.

Am I still shaking my head at that $500 price tag for one hour’s worth of work? Yes.

However, buying the tools and ladders to repair the slate roof ourselves would have cost more than $500. And it definitely would have taken us longer than an hour!

In a twisted sort of way, I’m happy this leak happened when it did. If we hadn’t been working on the Carriage House, we might not have noticed how bad the situation had become and over time, it could have cost us a lot more than $500.

Here are some additional resources on slate roofs that were helpful to us. One of the best tips was to be particular about the quarry your slate comes from. Not all slate is created equal.

8 Things To Know About a Slate Roof Installation

The Repair, Replacement and Maintenance of Historic Slate Roofs

What Home Inspectors Need to Know About Slate Roofs

Fixing a zero gravity reclining chair on the cheap. 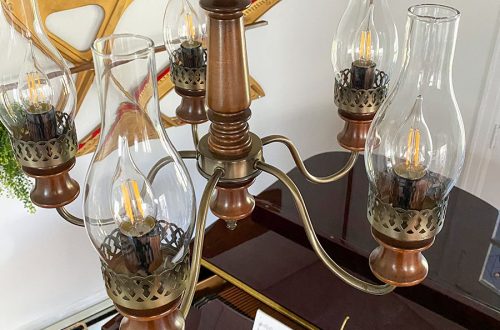 Wood Chandelier in the Music Room 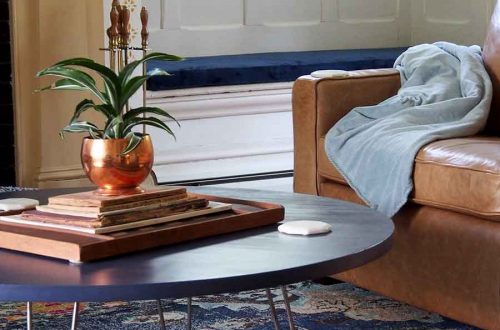 My Dining Table Is Now a Coffee Table