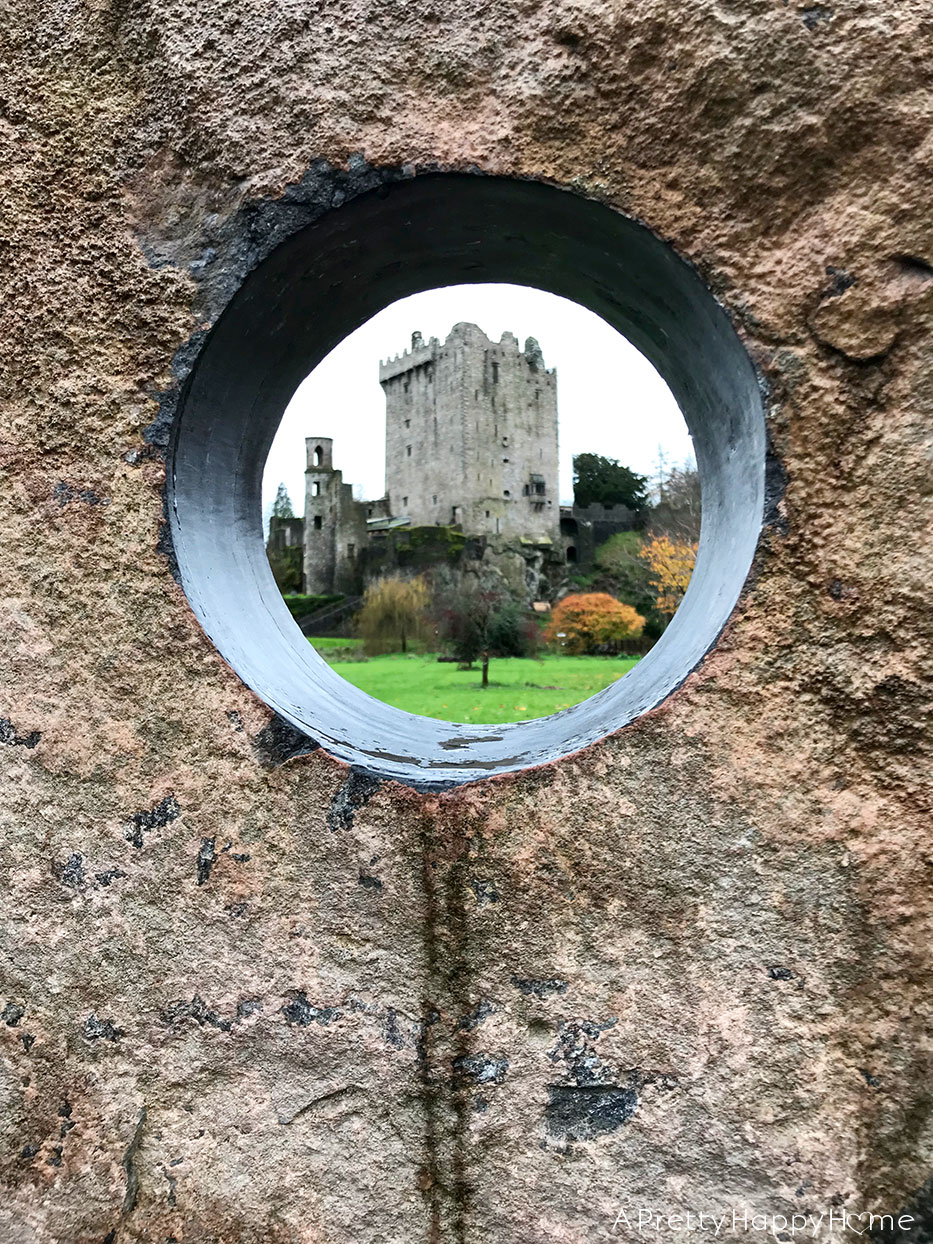 I finally kissed the Blarney Stone at Blarney Castle! Cross that one off the Travel Bucket List!

According to legend, I should be exceptionally eloquent now…but, I think I’m still waiting for the ol’ magic to kick in. Oh well.

Our family visited Blarney Castle on a cold, rainy November day. It was fantastic! Truly.

I could have done without the rain, but then it wouldn’t be Ireland! The original Blarney Castle was a wooden structure dating back to the 10th century. It’s long since gone. The stone castle you will see on your visit is the third structure on the site and it was built by Cormac McCarthy, King of Munster, in 1446.

There are many theories about the origin and history of the Blarney Stone most of which have been debunked. Among those is the legend castle management seems to promoting, which is that the Blarney Stone is half of the Stone of Scone given as a thank you to Cormac McCarthy.

What is the Stone of Scone? Well, it’s a real thing and is also known as the Stone of Destiny. It was last used in the coronation of Queen Elizabeth II in 1953. It would be cool if this connection to the Blarney Stone was true, but that’s part of the fun of legends. No one really knows.

But how did kissing the Blarney Stone become a thing? Well. That also has many theories. The folks at the castle believe a witch revealed the stone’s power. Once folks knew the stone had ‘power’ it was only a matter of time before people started puckering up, right?

While the historical references are a little mushy, there appears to be evidence starting in the 18th century of people kissing the stone to receive it’s power of eloquence. This is also known as the gift of gab or ability to flatter.

The Blarney Stone, if it does have power, was sure placed in an inconvenient spot to receive said powers.

It’s located at the very tippy top of the castle in the parapet. Do you know what a parapet is? It is the wall around the roof of a structure. Just imagine the roof is still there… That’s right, you’re headed for the roof of a castle built 600 years ago. In my amateur opinion, people in the 1440s must have been a heck of a lot more nimble than their present day counterparts. Or way less worried about falling…concussions…broken bones…etc.

As you’re walking up and up and UP the uneven stone steps to the parapet, your handrail is a rope. I’m guessing that’s an upgrade from the 1400s. When you’re at the top of the castle, you get in line to kiss the Blarney Stone. Or visit in November and there probably won’t be a line.

To kiss the stone you’re going to lay down on your back, reach your hands backwards behind you to grab railings attached to the parapet, tip your head backwards and kiss the wall where the Blarney Stone is located. Approximately half of your body is going to be hanging off into the abyss. Don’t worry. There are a couple of more iron bars and an Irish dude to keep you from falling to your death.

It’s really not that bad. I totally let my kids do it. Yes, I kissed the Blarney Stone too and I didn’t feel unsafe at all.

But perhaps it was better that I didn’t see how it looks from the ground until I was finished. If your husband forgets to take a picture of you locking lips with one of the world’s least hygienic tourist attractions, don’t worry. There’s another guy operating the big ol’ camera that’s taking your souvenir photo. While kissing the Blarney Stone was great fun or craic as they say in Ireland, it was a wee bit anticlimactic. There’s really no soaking in the moment. The staff manning the Blarney Stone had seen this a million times. While they were super nice, they were definitely in assembly line mode calling “next!” right after one person had finished.

I’m definitely glad I did it though! No regrets!

When you’ve finished kissing the Blarney Stone, the walk down is a bit easier. There’s a handrail instead of a rope. So that’s something.

You’re going to be thankful for modern medicine if you do fall on these steps though. Your tour of the castle is self-guided. You can step out of the stairwell to visit various rooms in the castle on your way up and down. At different points around the castle educational placards are set-up so you can learn about the castle’s history.

I have to admit, I did not spend as much time reading this information as I would have liked because I was focused on the kids and making sure they were being careful. Later that night I had to do some Googling to catch up on what I missed.

While the castle itself might not knock your socks off IF you’ve seen a bunch of castles, the experience is unlike any other you’re going to get in Ireland because of the Blarney Stone.

However, where we spent the most time and were continually delighted at every turn was on the castle grounds.

For instance, they have a Poison Garden. All those nasty plants that kill people in books and movies like nightshade and foxglove – they are growing them. My kids were FASCINATED. Another neat spot on the grounds is the Rock Close. It is a ‘magical place’ that may have been the site of druid worship back in the day. It was pure fun to explore the Wishing Steps, the Witch’s Kitchen, a boardwalk, unique rock formations and more in this area.

Remember, we were exploring in the rain and for the most part were distracted by our surroundings to worry too much about the weather. So maybe it was kind of magical!

I did have to dry the kids’ socks out at the B&B where we stayed when we were done though! There’s also a small cave on the grounds to explore! It’s called the Badger’s Cave and it was originally a secret escape route out of the castle. How cool is that?

This is the view looking out from the cave’s entrance on the day we visited. For a full list of gardens and other things to see on the 60 acres of castle grounds, click here.

When to Visit:
The castle is open year-round except Christmas Eve and Christmas Day.

In late November, when we visited, the grounds were still gorgeous and we walked right up to the stone. No waiting.

Unofficially, our B&B host said lines to kiss the Blarney Stone can be HOURS long during peak tourist season, such as August. I would not have waited hours to kiss the stone. I don’t have that level of patience in me.

Tickets:
It is a little bit cheaper (savings of one euro as of November 2017) for adults to buy tickets online.

Kids 7 and under are free. Family tickets are available.

Audio guides are available for purchase. How to Get There:
This is one of the times when visiting Ireland that a car would be helpful.

However, the castle is only 8km from Cork, so a cab ride would be approximately 15 euro from the Cork City Center. That’s an estimate from the MyTaxi app, so don’t hold me to that quote.

Here are the directions from the Blarney Castle website.

On-Site Amenities:
The castle gift shop was one of the better ones I’ve visited. We came away with a little luck from Ireland. However, just on the other side of Blarney Village from the castle is the largest gift shop in Ireland, Blarney Woollen Mills. It was amazing!! I don’t say that lightly. It had a combination of high-end clothing, some home goods, jewelry and then your regular souvenirs. I only tell you this so you don’t spend all your euros in one spot.

There’s also a cafe on the castle grounds and when we were there a separate coffee cart was open as well.

Kissing the Blarney Stone with Kids:

I called to verify this after our visit and the rules say kids 8 and up can kiss the Blarney Stone. The staff on duty did ask my 7-year-old how old he was, but let him proceed. I guess we lucked out? We didn’t know the age limit when we went.

It’s a height issue more than anything, I think, since you are hanging over a semi-open space with some iron rails for protection. He was tall enough to kiss the wall with help (as you can see the man has a tight hold on him), but not tall enough to bend backward far enough to reach the actual stone. He doesn’t know the difference though. No one tell him!

If you’re unsure about whether or not your kids will be able to kiss the Blarney Stone, definitely ask before you go up to avoid any disappointment. From a safety standpoint in the castle itself, I was definitely the “HOLD THE HANDRAIL” police. You’re climbing up near vertical, uneven steps holding onto a rope. You need to be able to exercise caution. It would not be my personal preference to do that with a toddler in tow or carrying a baby. Going down is still very steep, but there is an actual handrail instead of a rope.

Just remember, this castle was not built for tourists. It was built as an actual home and fortress in the 15th century. Treating the experience with respect, appreciation and caution is a good learning experience – for all of us.

Would I Recommend Visiting Blarney Castle?

Yes! If you are going to be in the Cork area, then I’d definitely recommend visiting Blarney Castle. The visit, on the whole, offered something that we hadn’t experienced yet.

However, if you have limited time in Ireland, then there are other locations that I’d prioritize first. As small as the country is, it’s impossible to do everything in just a week’s time.

Last, but not least, I am happy – thrilled actually – to leave you with this photographic gem of me kissing the Blarney Stone. See? I do show up on the blog every once in awhile! Still waiting for that eloquence though…

More information about Blarney Castle can be found on their site.

If you liked this one, here are more posts about visiting Ireland.

Here are some posts about our expat experience of living in Ireland. 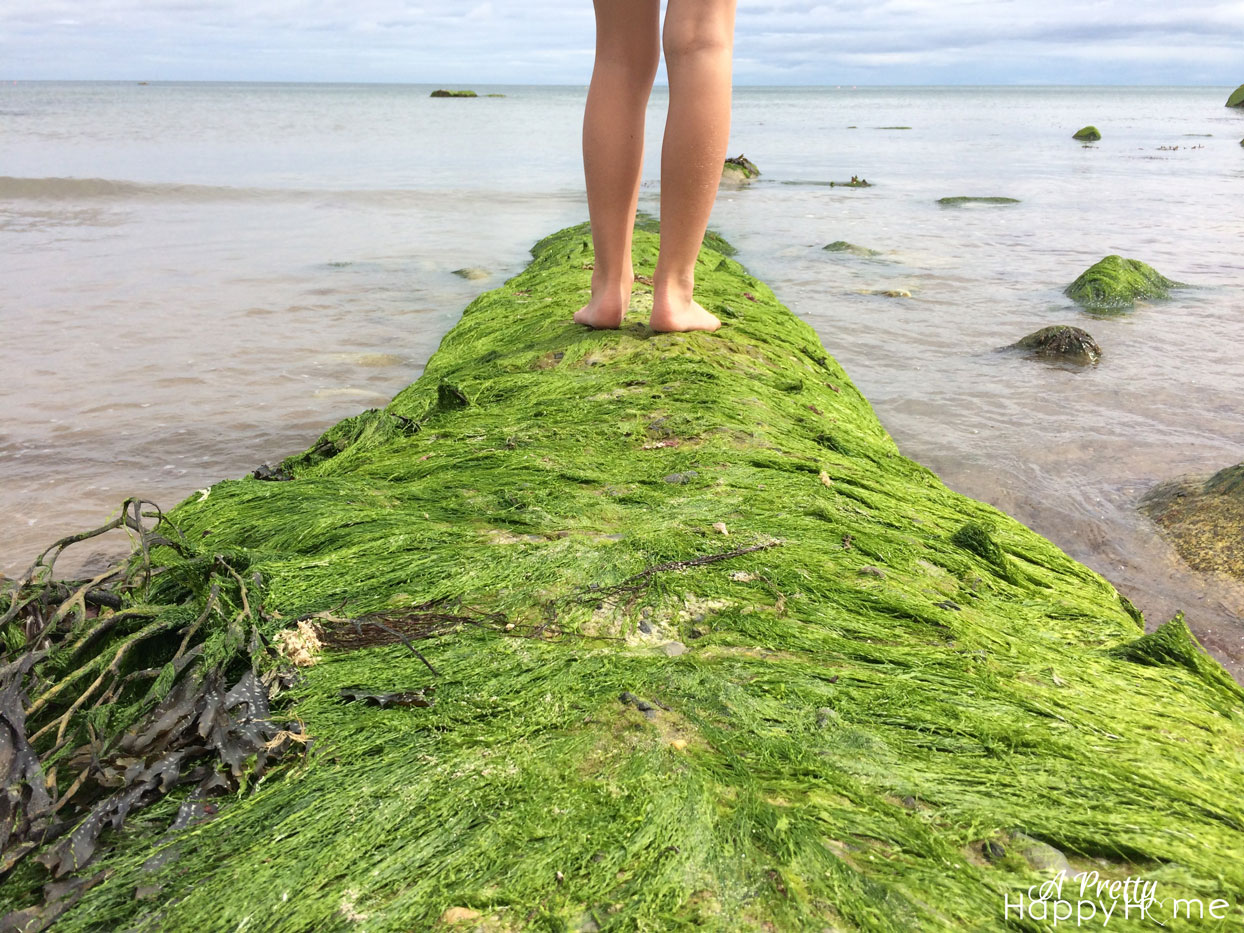 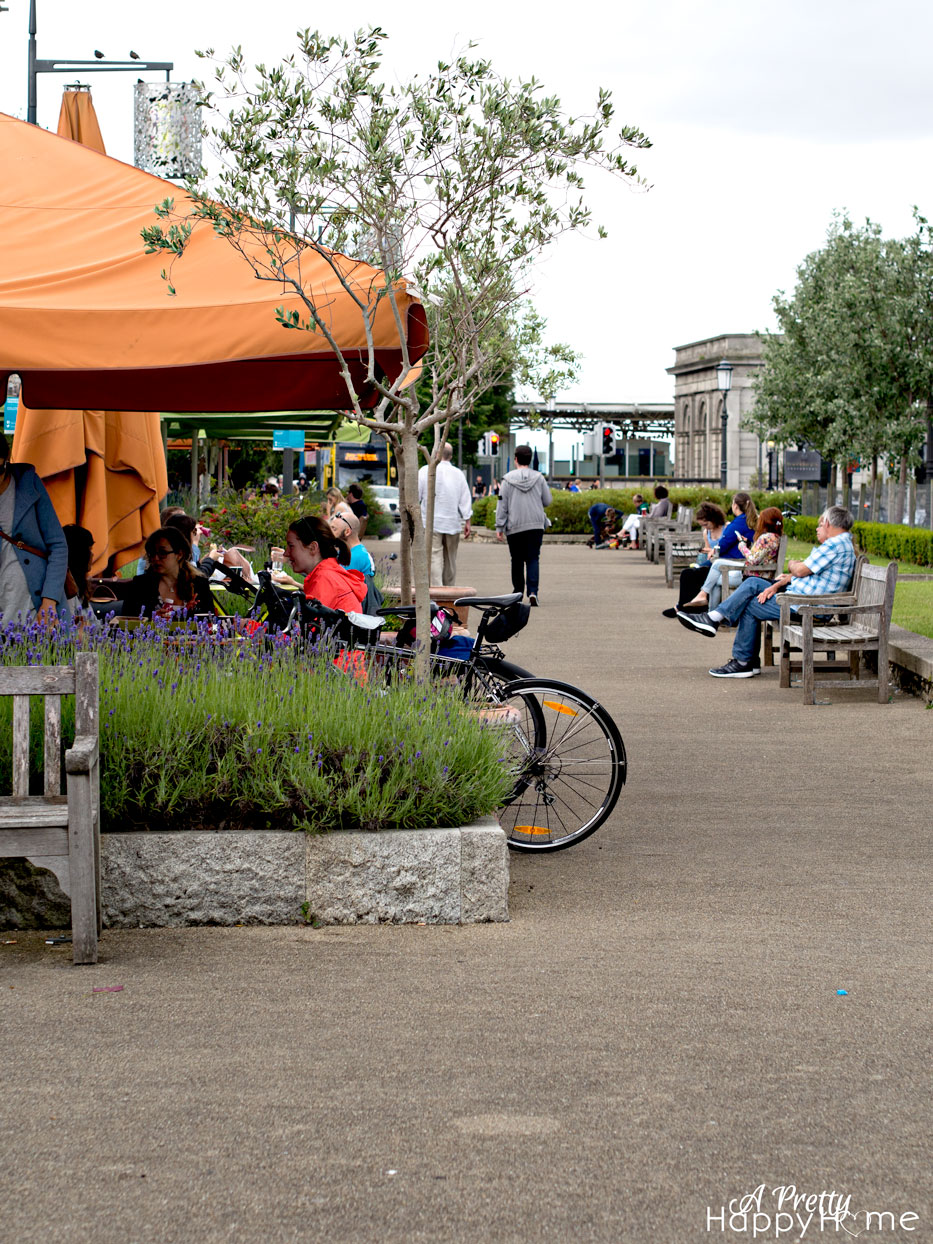 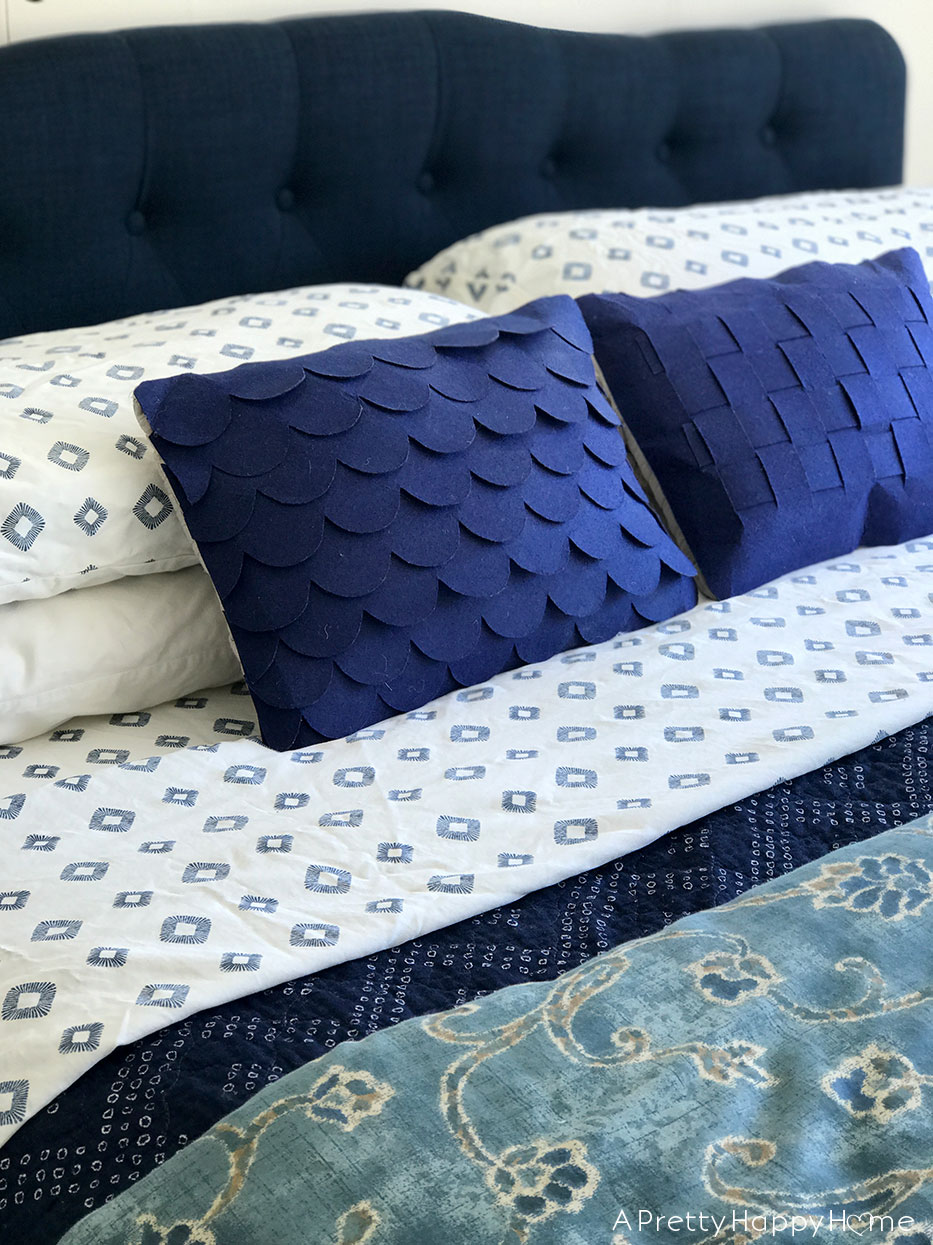 What I Bought While in the United States